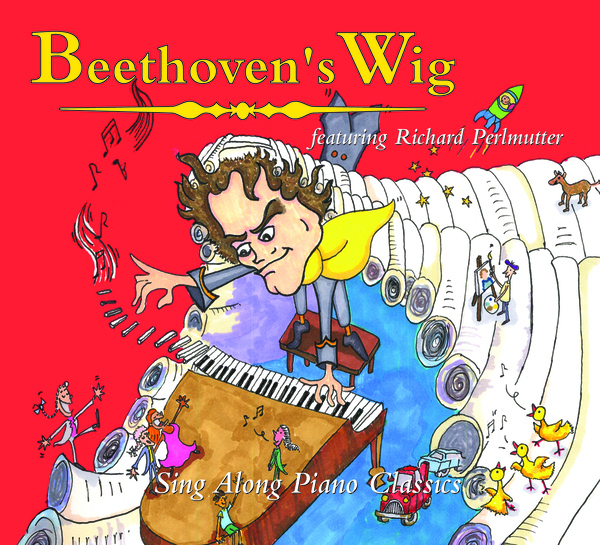 On this, the fifth Beethoven’s Wig album, the Wig turns from symphonic to piano music, adding its spin to giants of the keyboard: Chopin, Mozart, Beethoven, Brahms, Schumann, Debussy and Mussorgsky, as well as modern composers Stravinsky, Schoenberg and Henry Cowell.

Scott Joplin’s ragtime classic “The Entertainer” becomes the setting for a hilarious narrative about a piano that got stuck in the door. And “Poor Uncle Joe,” set to Chopin’s famous Funeral March, is an elegy for a car that has reached the end of the road.

In Mozart Makes Kids Smart, Perlmutter offers his take on the “Mozart Effect.” And “I Like Art” is a guided tour of some of the most famous paintings in history.

La De Da Sonata features incredible vocal gymnastics. And Perlmutter also includes the most egalitarian piano composition of all, “Chopsticks,” with lyrics about a pecking chicken in which Perlmutter clucks like a mad hen.

In addition, there’s a story about an annoying fly at bedtime in Brahms Lullaby, and a trip to the moon in Debussy’s Clair de Lune.

As on the previous two Beethoven’s Wig albums, Perlmutter’s son Sammy did the artwork. And Perlmutter’s brother Tom did the layout and graphics.

Produced at the legendary Village Recorders in Los Angeles, the album features piano performances by Grant Gershon, Associate Conductor of the LA Opera and Music Director of the Los Angeles Master Chorale. The piano pieces were recorded at the Dorothy Chandler Pavilion at the Music Center in Los Angeles.

Beethoven’s Wig: Sing Along Piano Classics has been called, “the most innovative and clever of all the Beethoven’s Wig albums.” It is a wonderful addition to one of the most honored series of recordings in the history of family entertainment - with 50 awards, including 4 Grammy Award Nominations.