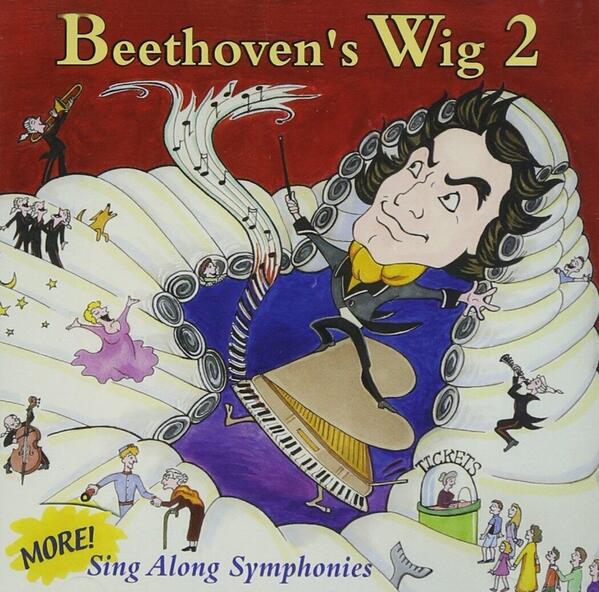 Most Popular Songs Sing Verdi Very Loud, It's The Same Every Verse, Wow What A Wedding Cake, Stuck In The Saddle Again

Most Popular Pieces In The Hall of The Mountain King, Grieg; Blue Danube Waltz, Strauss; Spring from the Four Seasons, Vivaldi; The Wedding March, Mendelssohn

This is the celebrated follow up to the first Beethoven's Wig. Once again, Perlmutter's ingenious lyrics hit the spot with even more fact and fancy about these famous pieces and their composers. There's "Wow What a Wedding Cake," the song about a ridiculously oversized desert set to Mendelssohn's "Wedding March." It should be de rigueur at every grandiose wedding. And there's the overly repetitive and extremely long song that audiences count along to at every Beethoven's Wig concert, "It's the Same EveryVerse," sung to Grieg's famous "In the Hall of the Mountain King." You can also hear an opera singer come out of her shell and go wild in "Sing Verdi Very Loud," from Verdi's "Rigoletto." And saddle up and go nowhere to "Stuck in the Saddle Again," from Suppe's "Light Cavalry Overture."

As a bonus (one that's included in every Beethoven's Wig album), there are trivia questions about the pieces and the composers. And for kids, parents and teachers there are activities to supplement the songs. At the end of the vocal renditions, each piece is performed without the words by a world-class orchestra, just as it was originally written.

This album won Perlmutter his second Grammy Award nomination and also was named and American Library Association "Notable Recording." Reviewers called Beethoven's Wig 2 "a rare and special album," "rollicking fun!" and "great for the whole family." One more said, "Only 5 stars, it deserves 10!"

It's a worthy follow up to Beethoven's Wig and another must for any family's music collection.